The end of our Highlight-series is approaching. Let’s talk about meta-progressions.

Meta-progression has become a common feature in the rogue-lite genre. Most popularly it comes in the form of new unlockable gameplay content. While this obviously increases replayability, in Gerty’s case it also serves to alleviate two other “problems” players might face:

1. Choice paralysis: Giving players too many choices right off the bat can make them feel overwhelmed, leading to them making uninformed choices. Having players start off with a smaller set of content instead, unlocking more as they play the game is a far better option. In our case we found this to be true with Forges and Items, which is why most Items in Gerty must be unlocked.

2. Unchanging gameplay: Rogue-lites are all about learning and experimenting. However, if every playthrough is the same character buying the same items, fighting the same enemies, it eventually gets tedious and predictable. Unlocking new content like characters and items through meta-progression is a good way of encouraging players to try out new things. And even in the long run, experiment with different characters, perk and item combination is a good way of keeping repeated playthroughs fresh. 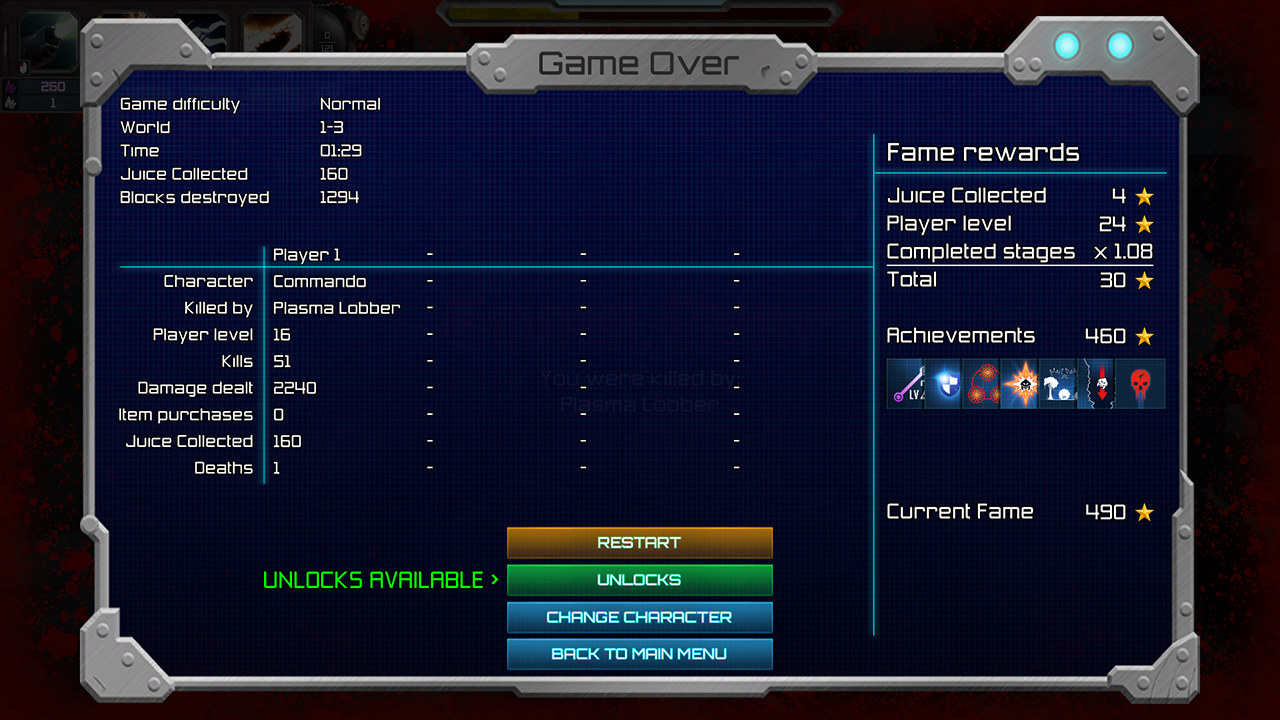 Originally we tied all unlockable content to specific achievements, but since not everyone is a fan of achievement hunting, we decided a new system would make more sense. Such was the birth of Fame.

The easiest way to think of Fame is as an “unlock currency” (no real money required). Every time you finish a playthrough – be it by death or completition – you’re awarded with Fame based on your performance. This includes the Juice you collected, your character’s level, the number of levels you completed and the achievements you unlocked. This means achievements are still important in the current system, but not required for those who don’t care for them.

So what can you spend it on?

When you’re exploring the deep tunnels of the alien planets you’re bound to come across several types of Forges. Spread across them you’ll find a collection of 40 Items, 24 of which are unlockable with Fame. The Items and Forges are divided into four categories:

If you feel like you’re in need of a slight edge in combat or just want to find a character build just for you, get unlocking and experimenting! 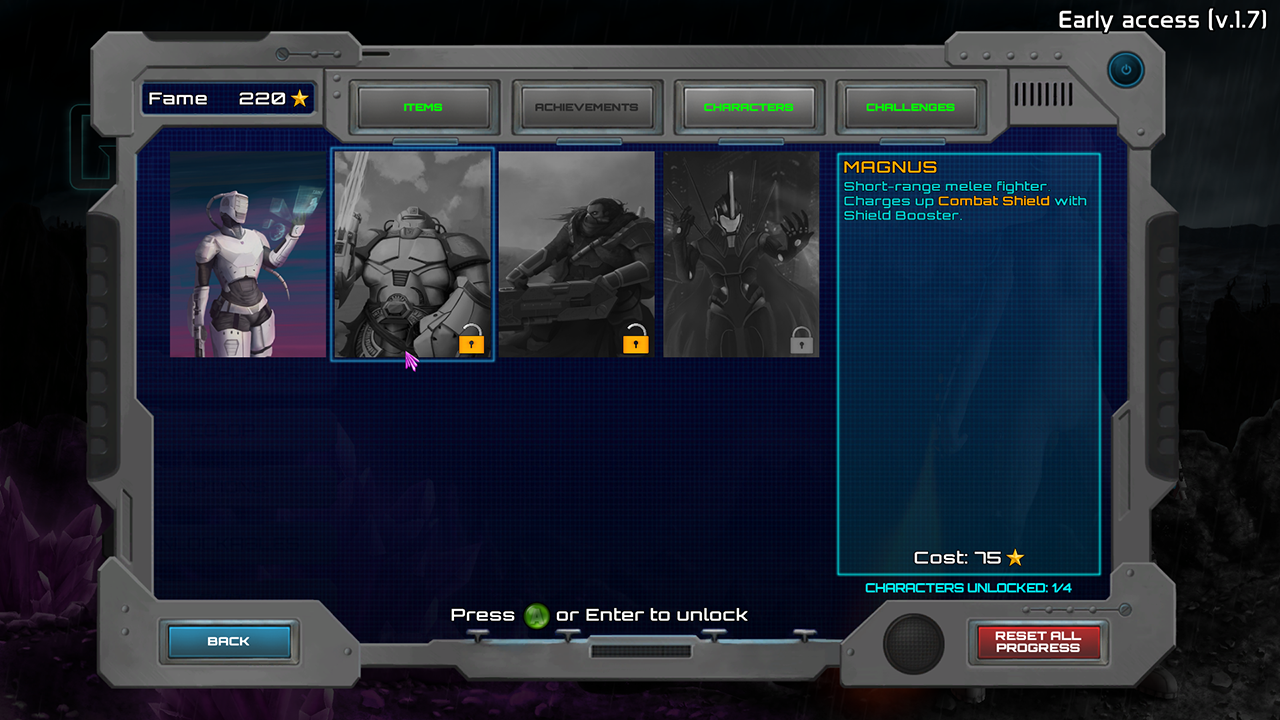 If you want to experience Gerty to its fullest extent (or Commando isn’t quite your style), there are three other playable characters available for unlocking:

You can use the links above to check out each character’s respective Highlight (with Unum coming next week).

Each of the characters has a different arsenal and playstyle, so be brave and try them all out – you might find a new favorite. We even have some character specific achievements for the completitionists crowd and Fame hunters, just in case the gameplay variety wasn’t incentive enough. 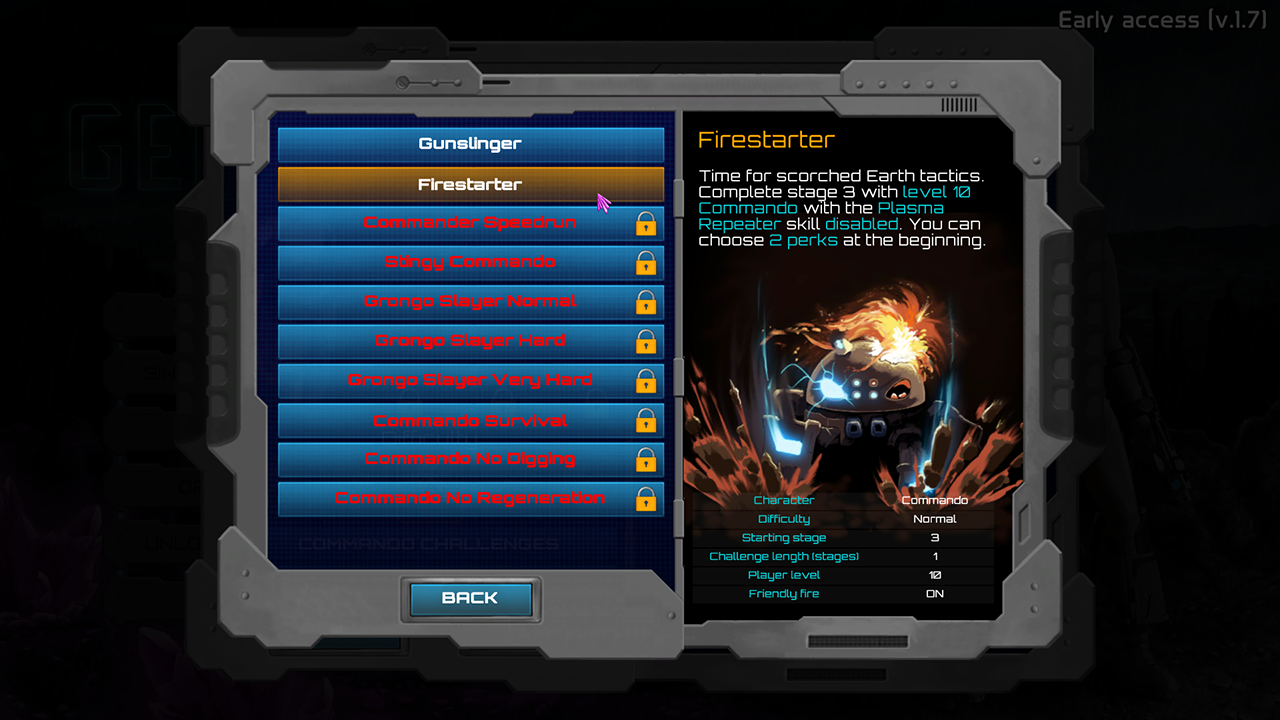 Can’t get enough Gerty and want to sink your teeth into something extra? Is Very Hard not challenging enough for you? We’ve got good news! You can unlock additional character Challenges to scratch those very itches – 10 Challenges per character for a grand total of 40. Most of them limit either your skills or stats in some way, so you can’t beat all of them using the same tricks. If you do manage to beat one you’ll be rewarded for your efforts with Fame. Maybe you’ll want to use it to unlock the next one and see if you’re a bad enough dude to beat them all?

Head on over to Steam, add Gerty to your Wishlist and play the free demo to prepare yourself for the Early Access release on December 3rd.